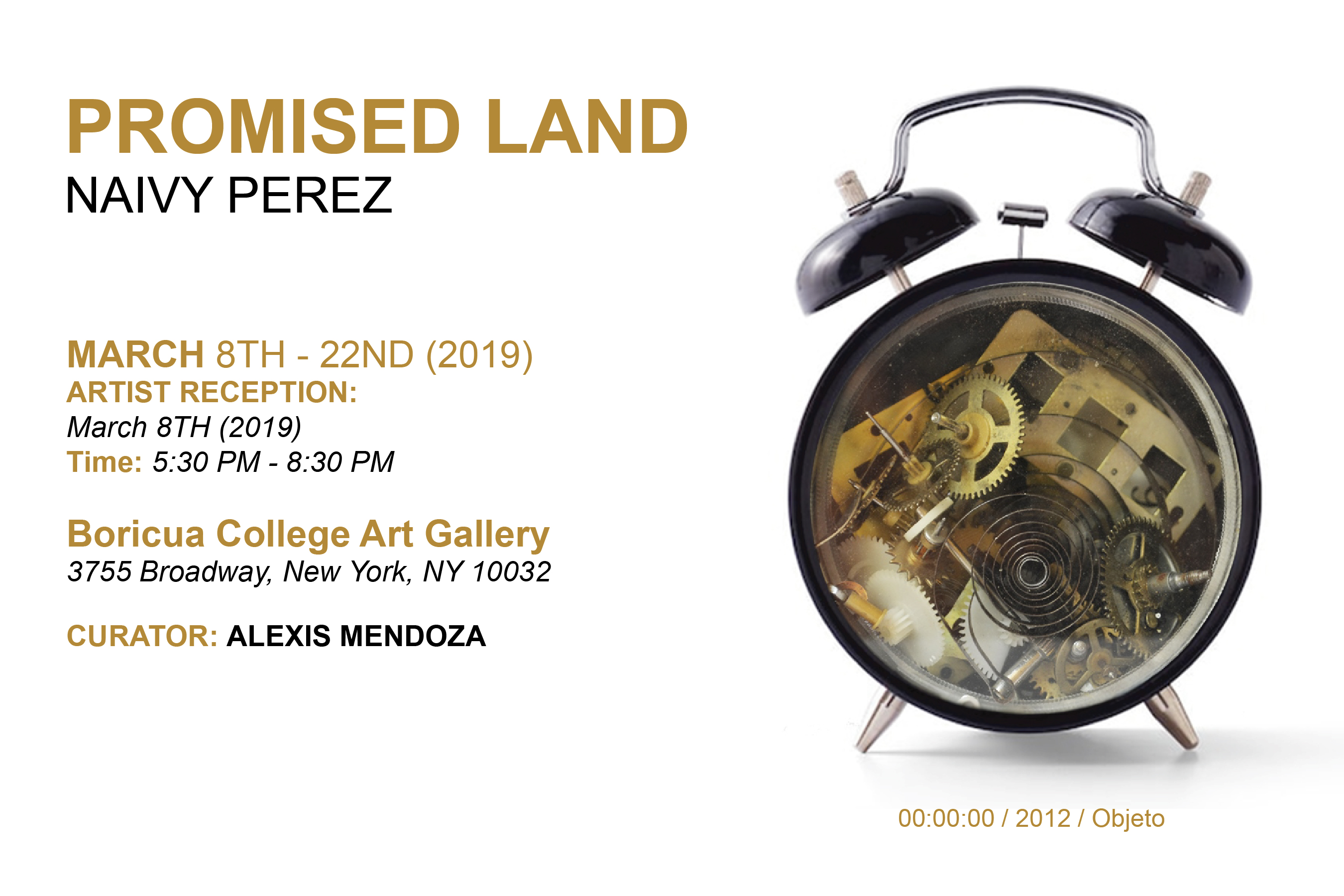 For the last 15 years Naivy Pérez based her work on the concept that art may exist solely as an idea and not in the physical realm, -the message is what’s important, the idea is everything-. While studying at the Instituto Superior de Arte (ISA, The University of the Arts) In Havana, Cuba, Naivy saw her work as a reaction against formalism and commodification and believed that art was created when the analysis of an art object succeeded the object itself and saw artistic knowledge as equal to artistic production. Promised Land is a survey exhibition of the last 15 years of Naivy Pérez’s artistic production; it’s a look back into the artist artworks from 2004 to the present. Naivy Pérez (Ciego de Ávila, Cuba, 1986) graduated from the Instituto Superior de Arte in Havana. Her artistic process shifts from radical, lyrical performances to minimalist installations integrating new technologies. For years, she has worked on a series of performances in which she tries to embody a number of social roles associated with the Cuban woman (housewife, brave soldier, prostitute, etc.). She also employed and gathers objects (ready mades) and manipulates them and/or transforms the traditional use of these objects.

The center piece in the show in titled Promised Land is a microscopic grain of sand, is a clear example of the theory behind the debate established by Naivy. You’ll need a magnifying glass or superhero vision to check out these miniature works of art. She challenges the notions about art, society, politics, and the media with the theory that art is more than a representational expression. She argued that art can be written, published, performed, fabricated, or simply an idealistic concept and still have communicative impact. In artworks such as: Genesis 3:16 in this piece she explored the passage in the Bible where woman deals with the two aspects of the married woman’s life, as wife and as mother. She denied the idea the woman —is condemned to a state of sorrow and subjection: proper punishments of a sin in which she had gratified her pleasure and her pride. I will greatly multiply thy sorrow —. Pérez intent to convey a concept to the viewer, rejecting the importance of the creator or a talent in the traditional art forms such as painting and sculpture. Works are strongly based on an object or a transformation, or manipulation of an object which is the case of La disputa del nuevo mundo (The dispute of the new world) a white painted World Globe she viewed the work primarily as a concept and allowed for the physical artworks not to be touch or repainted and even refabricated, the purification of a dream planet with all us in it. In this period not only Naivy Pérez challenged the importance of art traditions and discredited the significance of the materials and finished product, she also brought up the question at the nature of the art form – whether artworks were also meant to be proactive. From the beginning Perez’s understanding of art was expressed in the form of installations, digital art and performances.

She expresses a political content that underlies many works, where the event is not free to disregard international constant ranging from a long lasting debate on identity, culture and the legitimacy of using artistic discourses associated with being a Cuban artist. The work of Naivy Pérez, carry the representation that has gradually become a steady stream of messages short and fast, extremely fast consumption and disposable.  Rather, to speak from the depths of our being, the first thing we do is to looking clumsiness with the words that could reflect our emotion or our opinion. Search among hundreds of clichés to end with an open dialogue.  Faced expressive power exercised by the image, the work of the artist is to generate fissures that hurt the superstructure control. So some artists, still very few, addressed this environment that disturbs us in the most intimate, because we are confronted her and rocks, minimalistic images flowing in front of our eyes, immersed and influenced us.  A work that assumes the over saturation of stimuli from the analytical point of view will undoubtedly be an attempt to control this environment, the space, the gallery, as if each piece had been created with a form of catharsis aesthetics, which exorcised everything that stimulate the human experience. When an artist like Naivy Pérez uses all these forms of art and ways of expression, it means that all of the planning and decisions are made beforehand and the execution is a perfunctory affair. The idea becomes a machine that makes the artwork become alive. Promised Land, the exhibition challenges the validity of traditional art, the existing structures for making, publicizing and viewing art. Moreover, it claims that the materials used and the product of the process is unnecessary.  As the idea or ideas is of major significance. Naivy’s body of work consists of information, including perhaps photographs, written texts or displayed objects. It has come to include all art forms outside traditional painting or sculpture, such as installation art, video art and performance art. Because the work does not follow a traditional form it demands a more active response from the viewer “is made to engage the mind of the viewer rather than his eye or emotions.”, in other words it could be argued that the work of art in fact only exists in the viewer’s mental participation. “It doesn’t really matter if the viewer understands the concepts of the artist by seeing the art. Once out of her hand the she has no control over the way a viewer will perceive the work. Different people will understand the same thing in a different way –. She deliberately produced works that are difficult if not impossible to classify according to the old traditional format. Naivy Pérez consciously produced work that could not be placed in a specific art category, or perhaps resulted in no actual art object which hence emphasize that the idea is more important than the artifact. Her approach is not necessarily logical.  Artworks like “Baby Don’t Cry” and “00:00:00”, the object is not an object it becomes a discourse, a simple analysis of current subject or social issue. The artwork doesn’t need be complex. Most artworks included in this project are fairly simple.

Echoing the difficulty in classification as mentioned above, her vision cannot be defined in terms of any medium or style. Rather, it can be defined in the way it questions what art truly is. Traditionally, an ordinary object such as a rock in a shape of a heart, “Sacred Heard” (Sagrado Corazón) cannot be thought to be art because it is not created by an artist or has any meaning of art, it is not unique, and it possesses hardly any probable visual properties of the traditional, hand-crafted artwork; an intervention, in which image, text or object is positioned in an unpredicted context, hence rousing awareness to that context: e.g. the museum or a public space; written text, where the concept, intention or exploration is presented in the form of language; documentation, where the actual work, concept or action, can only be presented by the evidence of videos, maps, charts, notes or, most often, photographs. When In the presence of Naivy’s work one almost always begins to oneself questions, what is it? What she try to express? Etc. I could argue that it is completed by the intention. “This could be art”: “this” being presented as object, image, performance or idea revealed in some other way. Naivy Pérez’s proposal is therefore “reflexive”: the object refers back to the subject; it represents a state of continual self-critique.